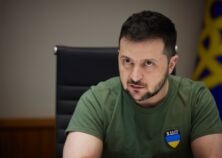 Good health to you, fellow Ukrainians!

Today was a day of extremely active foreign policy activity – almost a marathon of phone conversations. We are increasing the number of those who stand for Ukraine’s candidacy and adding confidence that the decision on Friday will be positive.

Slovakia. In a conversation with Prime Minister Heger, we coordinated our positions on the eve of the session of the European Council.

Lithuania. I thanked President Nausėda for the decision of the Three Seas Initiative Summit to grant Ukraine the status of a partner-participant. We also coordinated our steps.

Hungary. There was a very fruitful conversation with Prime Minister Viktor Orbán. I invited him to visit Ukraine and thanked him for the important support for our sovereignty and territorial integrity of our state. We agreed to develop cooperation in the energy sector.

Portugal. We agreed with Prime Minister António Costa to involve his country’s experience in our rapprochement with the European Union.

Next – Denmark. I expressed gratitude for supporting Ukraine, including with weapons. I also noted the speech of Mrs. Frederiksen in the Verkhovna Rada of Ukraine, which took place today.

Spain. In a conversation with Prime Minister Sánchez I noted that our cooperation would strengthen both Ukraine and the entire European Union. The possible outcome of the NATO Summit in Madrid, which will take place in late June, was discussed.

Croatia. I am confident that we can expand our cooperation both bilaterally and at the level of European structures. I thanked Prime Minister Plenković for his support of Ukraine.

I was happy to see in Kyiv a great friend of our state – Prime Minister of Luxembourg Bettel. And I would like to draw your attention once again to the assistance from Luxembourg. 15% of the defense budget of this state – this was a contribution to the defense of Ukraine. Both the greatness and the nobility of the state are immediately felt.

Today, Mr. Bettel visited the cities of the Kyiv region that had been liberated from the occupiers. I am grateful to him for his sincere understanding of our people and for Luxembourg’s readiness to take part in the post-war reconstruction of Ukraine.

My schedule for tomorrow is as busy as today. I will do my best to ensure that the historic decision of the European Union is adopted. This is important for us.

By the way, today, without delay, I signed the law on ratification of the Istanbul Convention adopted yesterday. Protecting all people from violence and discrimination is our principle.

In all negotiations, I always emphasize that the seventh package of the European Union sanctions is needed as soon as possible. Russia must feel a constant increase in pressure for the war and for its aggressive anti-European policy. Another Russian threat to Lithuania, another wave of energy pressure, another batch of lies from Russian officials about the food crisis are all arguments to agree on the seventh package of sanctions.

The situation on the frontline is without significant changes. With the help of tactical moves, the Ukrainian army is strengthening its defense in the Luhansk region, which is really the toughest area right now. The occupiers are also putting serious pressure on the Donetsk direction. In the Kharkiv region there is brutal and cynical Russian artillery shelling. It will not give anything to the occupiers, but the Russian army is deaf to any rationality. It simply destroys, simply kills – in this way it shows its command that it is not standing still. In the south we defend our Mykolaiv region, our Zaporizhzhia, and gradually liberate the Kherson region.

And just as actively as we fight for a positive decision of the European Union on the candidacy for Ukraine, we fight every day for the supply of modern weapons for our country. We do not decrease our activity for a single day. The lives of thousands of people depend directly on the speed of our partners – on the speed of implementation of their decisions to help Ukraine.

And I want you to realize that when I talk about signing such decrees, it’s not just a routine and not something mechanical. It is only thanks to the mass courage and wisdom of our people on the battlefield that Ukraine lives and can really count on victory.

Eternal glory to all who fight for our state!

Eternal memory to all who gave lives for Ukraine!

The post Every day we fight for a positive decision of EU on the candidacy for Ukraine and for the supply of modern weapons, – President Zelensky appeared first on UATV.

See Also:  Six out of 80 occupiers left in one unit in Kharkiv region - interception by Ukrainian intelligence