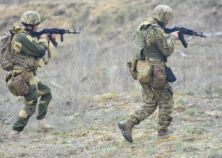 The one hundred twentieth (120) day of the heroic resistance of the Ukrainian people to a russian military invasion continues.

In the Volyn and Polissya directions, in the period from June 22 to July 1, 2022 in the Gomel region, near the state border with Ukraine, mobilization training of the armed forces of the republic of belarus will continue. During it, it is planned to work out the issue of conscription of conscripts.

As part of combat training activities, exercises are also conducted with units of the Special Operations Forces of belarus with the involvement of instructors of the Armed Forces of the russian federation. The main attention is paid to sabotage and reconnaissance activities.

In the Siversky direction, enemy units continue to be located in the border areas of Bryansk and Kursk regions. The enemy maintains up to three battalion tactical groups from the 1st Tank Army of the Western Military District and airborne units. Improves defensive positions in the area of the settlement of Tiotkino, Kursk region. The aggressor continues to fire on units of the Defense Forces in the border areas in Sumy oblast.

In the Kharkiv direction, the enemy’s main efforts are focused on preventing the Defense Forces from entering the rear of a group of occupying forces operating in the Slovyansk direction. The enemy conducted air reconnaissance in the areas of Bayrak and Rubizhne.

In the Slovyansk direction, the aggressor’s group focuses on improving the tactical situation and identifying weaknesses in the defense of our troops. The enemy is trying to create conditions for the resumption of the offensive in the directions of Izyum – Barvinkove and Izyum – Slovyansk. In order to strengthen the grouping of troops in the area of the city of Izyum, the enemy moved up to two tank units. The occupiers plan to use heavy flamethrower systems in the Slovyansk direction.

In the Donetsk direction, the enemy is concentrating its main efforts on establishing full control over the city of Siverodonetsk, conducting offensive operations to surround our troops near the city of Lysychansk, and blocking the main logistics routes.

In the Siverodonetsk direction, the enemy captured the settlements of Loskutivka and Ray-Oleksandrivka. Conducts assault operations in order to establish control over the settlement of Syrotyne. Carries out preparatory measures for the forcing of the Siversky Donets River.

In the Bakhmut direction, the occupiers are conducting offensive operations in the directions of the settlements of Zolote and Vovchoyarivka. They are trying to seize the dominant heights in the area of Berestove in order to establish control over the Bakhmut-Lysychansk highway. To strengthen the group in this direction, in the area of the settlement of Novotoshkivske, the enemy transferred to one battalion tactical group from the Central Military District.

In the Kramatorsk, Avdiivka, Kurakhivka, Novopavlivka and Zaporizhzhia directions, the enemy did not take active action. Carries out shelling in order to restrain the actions of units of the Defense Forces and prevent their transfer to other directions.

In the South Buh direction, the occupiers are concentrating their main efforts on preventing our troops from conducting counter-offensive operations in the Kherson and Mykolayiv oblasts. It carries  out engineering equipment positions.

In the Mykolayiv direction the enemy developed artillery divisions in the certain areas. In the future, attempts to carry out assault operations in the directions of Kiselivka – Posad-Pokrovske and Oleksandrivka – Lupareve in order to reach the administrative borders of the Kherson region are not excluded.

In the Kryvyi Rih direction, the aggressor is carrying out engineering improvement of positions.

Ships of the Black Sea Fleet in the waters of the Black and Azov Seas continue to perform tasks of isolating the area of hostilities and reconnaissance. The aggressor continues to block civilian shipping in the northwestern part of the Black Sea.

See Also:  Pilot from "Wagner" [group] tells Ukrainian Security Service how he dropped bombs and how much Russia pays for it

Five missile cruise missile launchers (up to 40 missiles in total) are ready for use in the Black Sea.

Our units continue to perform missile and artillery fire missions in certain areas. Ukrainian defenders inflict losses on the russian occupiers in all areas where active hostilities continue.

We believe in the Armed Forces of Ukraine! Together to victory!